So in Zimbabwe judges just pass lawsuit decisions without anyone approaching the accused kekekekeke .Can someone approach me please . Here is the challenge. Sue me iwewe Chikanza if you are not a donor funds thief so you get me into trouble yourself not kunyepa about a 2016 publication that I did not write.You are in Britain too so it’s actually very easy for you to sue me.

On video it is saying Viomak has been ordered to pay $45 000 by a judge .For what I dont know . Whoever the judge is . I guess the judge’s head is stuck between the desperate lying lunatic’s buttocks.

No one ever contacted me about a lawsuit except for that Tafadzwa bogus lawyer who emailed me in 2016 trying his luck and I asked him to bother the person who wrote the write up and stop wasting my time .I published and shared his email in whatsapp groups and on facebook etc. That was the first and last time I heard about a sewage lawsuit until 2 days ago when my dear sisters refered me to Zimeye facebook page where Simbarasatan Chikanza was even lying that Betty Makoni worked so hard to get me sued and he was congratulating her. Haasvuti mbanje ere murume uyu .I wonder.Betty I was told long back and recently that she’s mentally unstable and is on tablets.

In case you missed the lawyer’s email and my response, I will share again. Tafadzwa went on to sue the Herald and HMetro. The lswsuits were unsuccessful .Did anyone see Chikanza do videos about the lawsuits? Why not?

On story it is saying

“A Harare model, Tafadzwa Mushunje has won a 3 year lawsuit against the Zimbabwe Republic Police over unlawful arrest and malicious prosecution.

Mushunje was arrested after being accused in a Facebook rumour created by a UK based bully who calls herself Viomak. The latter did not just manufacture the malicious story, she went on to report to the ZRP so they open a file, all based on her rumour. Tafadzwa Mushunje was as a result treated like a criminal, arrested and assaulted while in custody. She also suffered harassment and humiliation across the world particularly on social network forums.” Zimye

Kekekekeke seka hako wasu .Mucharwadziwa neni kusvikira mapererwa ngemanyepo. Below is the writeup written by a woman and sent to sisi Vee for publication. Sisi Vee *DID NOT CREATE or WRITE* that 2016 write up as claimed by imbwa iyo Simbarashe Chikanza desperate to see me in trouble because I despise Nelson Chamisa etc.I did not even contact the police but the police picked up the publication as it went viral .I could have contacted the police to investigate if I had their contacts ..kutyei . Ko handiti ndiro basa ravo to investigate criminal cases.

“Simbarasatan or anyone else never waste your energy and time to brainwash Zimbabweans with lies : They know in and out what I publish and how I publish.Many of them actually remind me about what I would have shared that I would have forgotten .That’s how alert and dedicated they are .They don’t need your lies.They have the truth from me.” Said sisi Vee.

The Tafadzwa write up below published by sisi Vee after a woman sent it to her .This is the write up that Chamisa bootlicker and sewage journalist Simbarashe Chikanza is saying I created. Kekekekekeke chapererwa chashaya kuti chondinyaradza sei. Where did I create a story about Tafadzwa? Moreso I rarely write stories like icho chiSimba ichi.I just publish what people sent me and my communication with them and the accused.
—–

From the source writing to sisi Vee 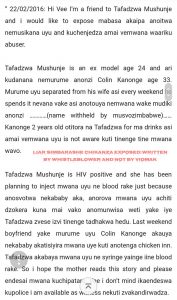